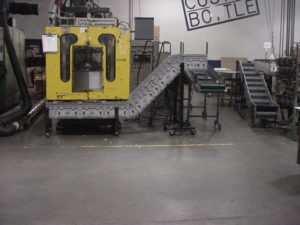 The maintenance requirements and resulting downtime of heavy steel conveyors being used for years by Custom Bottle were causing a number of production and safety problems. “Virtually every other conveyor we used had some safety issue,” says Mark Evjen, R&D Engineer. “Our steel conveyors kept getting jammed up with tails or other scrap, which caused the drive chains to flip off. The workers would remove the guards in order to put it back on and after a while you start losing guards and exposing pinch points.” Custom Bottle got to the point that they practically needed a full time maintenance person just for conveyor repairs.

The DynaCon conveyor system holds up much better than the metal conveyors previously used by Custom Bottle. The motors are highly dependable for constant operation. “I’ve never had to change out a bearing or any other motor components on the modular system. That’s a big plus” said Evjen. “Servicing the DynaCon modular conveyors is much simpler and faster and they usually have the parts on hand or I can get them overnight.  To service a DynaCon conveyor you simply pop off the two end caps, pull out a pin, and remove the entire belt,” he says. 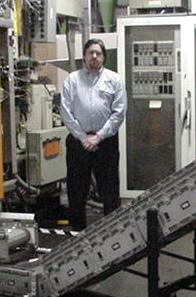 The design of the plastic modular conveyors contributes to operator safety. Because the modular conveyors keep everything enclosed in the track, Custom Bottle doesn’t have the safety problems they had with their steel conveyors.

Worker safety was greatly improved and maintenance time was reduced with the change to the DynaCon plastic modular conveyor system.