Twenty years ago there were two types of belts used:  rubber belts and plastic link style belts.  Rubber belts had to be tensioned, so reinforcing steel or fabric cords were incorporated into the middle of the belt.  If these cords were exposed they became harborage points for bacteria.  Additionally, because the belts needed tension to operate, side to side tracking problems often became an ongoing maintenance issue.

The most popular belt during that time was a plastic, link style, modular belt.  These belts had an open hinge making them easier to clean, but they were still extremely time consuming to clean.  It was nearly impossible to guarantee that every one of the thousands of hinges, in a single belt, was properly cleaned and sanitized.  Additionally, these belts are very heavy and hard to put on and take off the conveyor. 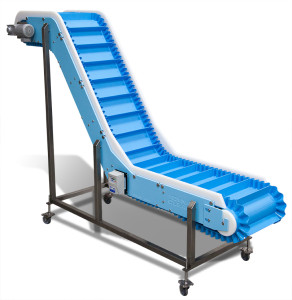 About ten years ago a noticeable, major belt revolution began.  Polyurethane tensionless conveyor belts were introduced and have solved almost all of the problems associated with food conveyance.  Benefits of the patented tensionless belt system are:

Polyurethane tensionless conveyor belt technology, partnered with an easy-to-clean sanitary conveyor design, will save you a substantial amount of money in three specific categories:

It has been enjoyable to use this game changing belt technology when designing sanitary conveyors for the food processing industry.

Paul Kuharevicz
Sales Project Engineer at Dynamic Conveyor Corporation
Paul Kuharevicz is a sales project engineer at Dynamic Conveyor Corporation. Paul’s contributions have led to a wide range of custom conveying solutions designed to meet the changing needs of manufacturers, and helped develop the original DynaCon conveyor line. You may recognize Paul from the company’s videos highlighting many of these solutions. Paul also contributes to St. Francis de Sales Church, having served as chairman of the buildings and grounds committee,and as co-director of the church’s Capital Campaign. Paul is on track to meeting his goal to ride his bicycle “around the world” by riding 24,000 miles in 12 years, and also enjoys photography, cross-country skiing, and hiking with his wife.